New Zealand’s reliance on the cardiovascular medicines metoprolol succinate and cilazapril is out of step with other countries, writes Dr Richard Medlicott, [Previous] Medical Director of the Royal New Zealand College of General Practitioners.

They dominate the market for cardiovascular treatment, despite the availability of alternative funded medications and therapy options, making us particularly vulnerable when supplies run low – as recent stock issues have highlighted. While we have been prescribing these medications appropriately, with both drugs having sound evidence backing them, New Zealand faces a potential risk to supply if we don’t start addressing our prescribing behaviour.

Seventy-two per cent of the approximately 330,000 patients on beta-blockers in this country are prescribed metoprolol succinate extended release tablets. The medication (Myloc CR, Betaloc CR and Metoprolol – AFT CR) is used to treat a range of heartrelated conditions including angina, arrhythmia, heart failure, hypertension and postmyocardial infarction.

The uneven distribution of supply to this market poses a supply risk when stock issues arise. A manufacturing problem in late 2015 and early 2016, for example, demonstrated the extent to which New Zealand is exposed when supply is disrupted.

The sheer size of the metoprolol succinate market, which numbers at around 240,000 patients, made resolving the supply issue in a reasonable timeframe difficult. New Zealand simply couldn’t obtain sufficient volumes of the product from alternative suppliers to satisfy demand.

Compounding the issue, suppliers of alternative beta-blockers like metoprolol tartrate (Apo-Metoprolol and Lopressor) didn’t have enough of their own stock to meet demand (each of the alternatives having less than a five per cent share of the market). Nor were suppliers able to respond quickly enough, with lead times on alternative treatments of up to six months.

New Zealand’s usage of metoprolol succinate extended release drugs differs significantly to other countries. In Australia, for example, the market is more evenly spread and is generally our first port of call to resupply the market when there are stock issues. However, continuity of supply is never guaranteed given the Australian market for metoprolol succinate extended release medication is so small – just five per cent of Australian patients are prescribed the drug.

Comparison of relative beta-blocker use in Australia and New Zealand, by % of patients 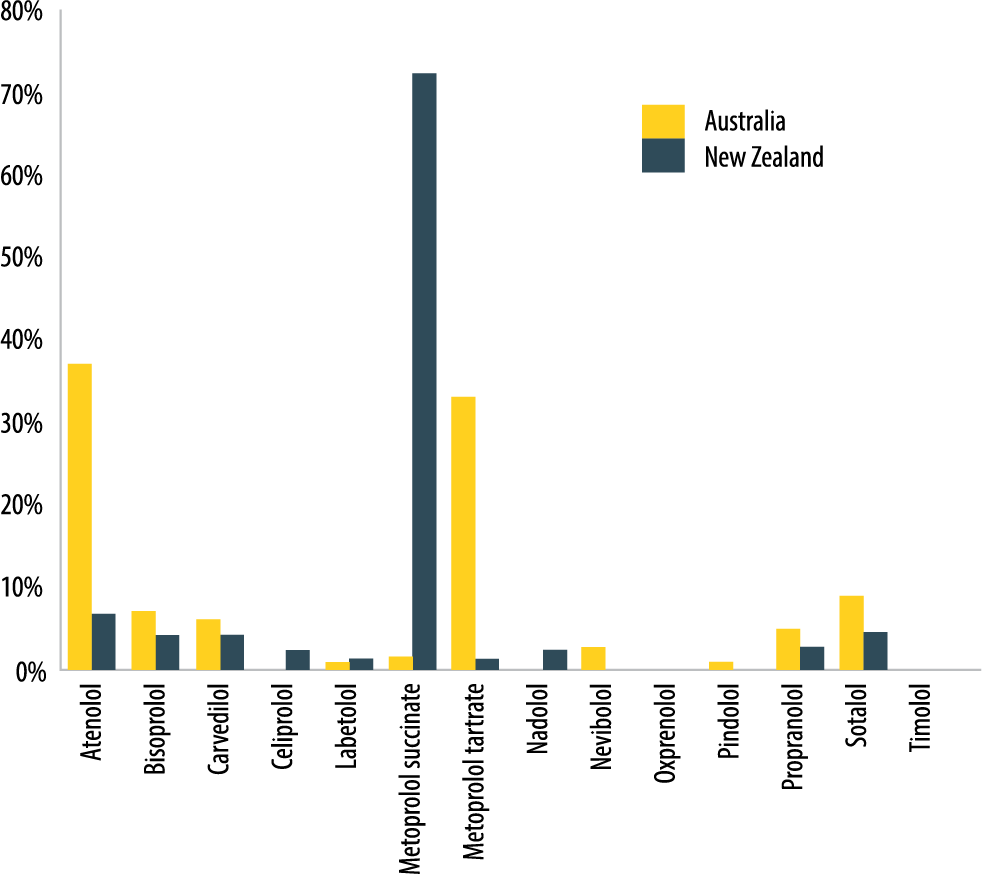 There are historical reasons as to why metoprolol succinate extended release drugs are so commonly prescribed in New Zealand. As BPACnz notes, its popularity is likely due to its ability to treat such a wide range of heart-related conditions, and the drug’s past heavy marketing is also considered to have played a part.(external link)

Ongoing metoprolol shortages over the past two years have stretched New Zealand’s ability to maintain consistent supply, inconveniencing patients, general practitioners and pharmacists to varying degrees. While PHARMAC has tools in place to manage medication supply, our reliance on stocks of products that are not routinely prescribed globally has the potential to adversely impact New Zealand patients.

A similar supply issue exists with the ACE inhibitor market. Around 61 per cent of the approximately 500,000 people in New Zealand currently prescribed an ACE inhibitor are on cilazapril, a medication commonly used to treat hypertension and congestive heart failure. Its disproportionate market share is the result of historical funding decisions which have impacted prescriber choice – and there has been no impetus for prescribers to switch to alternatives.

As with metoprolol succinate extended release tablets, cilazapril is a medication that is clinically appropriate to prescribe but whose high rate prescription rate poses a supply threat.

New Zealand’s preference for prescribing cilazapril in such proportionally high volumes is unique internationally – it’s no longer used in the United States, the United Kingdom or Australia. Subsequently, in the event supply is disrupted, New Zealand would be unlikely to be able to source enough product to meet demand.

Comparison of relative ACE inhibitor use in Australia and New Zealand, by % of patients 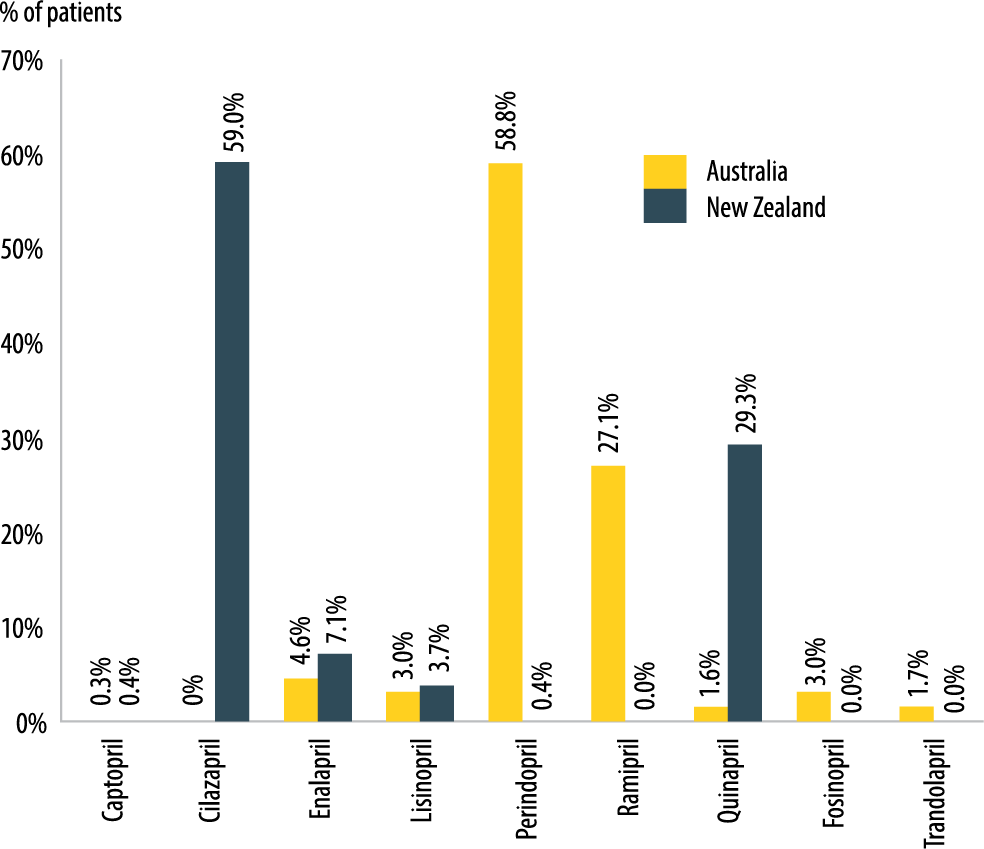 Encouraging clinicians both in hospitals and the community to change the type of beta-blockers and ACE inhibitors they prescribe to patients will be key to helping spread distribution more evenly.

Bisoprolol and carvedilol, for example, each comprise around 2.5 per cent of the beta-blocker market but are viable alternatives to metoprolol succinate extended release drugs that could just as effectively meet patient demand over time. Similarly, alternatives to cilazapril such as lisinopril, perindopril and quinapril are currently underprescribed but through greater clinician awareness could be more widely used.

Starting new patients on alternative medications to metoprolol and cilazapril, rather than switching existing patients to other medications, would be the most effective way of reducing supply disruption.

As clinicians, we also need to start thinking about whether the medication we’re prescribing is best targeted to the condition we’re treating. BPACnz points out, for example, that beta-blockers are generally a fourth line option to treat uncomplicated hypertension, and may be more effective in younger patients with the condition.(external link) It also notes there is also no evidence that one beta-blocker is superior to any other in managing hypertension.

The role of betablockers for cardioprotection post infarction has also changed over the years. Not all patients need to be on beta-blockers long term after an ischemic event. From six to 12 months onwards post-myocardial infarction, consider withdrawing beta-blockers for patients without heart failure or arrhythmias, if re-vascularisation has occurred.(external link)

As clinicians, our course of treatment is down to our professional judgement, based on the available evidence. I fully appreciate that it makes perfect sense to stick to prescribing what we know and are comfortable with, given the strong clinical evidence supporting these medications.

However, by making best use of alternative medication and treatment options, we’ll be able to develop a market where demand is more sustainable over time. This will ensure that when supply issues do arise, we’re well placed to respond so that patients will always have continued access to the treatment they need.